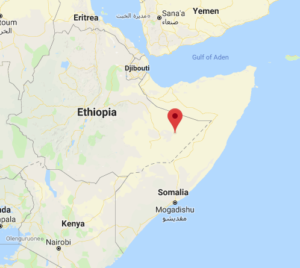 An armed group from Somalia has crossed into Ethiopia and killed 22 people, according to a highly placed source in the Ethiopian Somali regional government, who said about 50 people were also injured in the cross border attack.

The attack took place in the Ethiopian border town of Gehandale, in Warder Zone and lasted about nine hours on Wednesday. The attackers had left the town before dusk.

The identity of the attackers was not immediately clear; and nor their motives.

The attackers were equipped with modern weapons and vehicles, according to the source.

Cross border attack is unusual in the border areas between the two countries but intelligence gathered in the last one week showed a group was planning the attack, the source said and added that a swift action had not been taken by the Ethiopian side.

There was an Ethiopian army stationed in Warder Zone and a small unit has also been present in the vicinity of the area under attack. The source said they have been trying to find out why the army did not try to stop the attack.

The people in the Somalia side of Gehandale have been claiming that the area in the Ethiopian side, that had come under attack, belong to them.

Several residents of Gehandale had left the town following the attack.

Uglier faces of discrimination against the Amhara people in Ethiopia

Open Letter to Dr. Abiy Ahmed, Prime Minister of Ethiopia- Make Sure Ethiopia’s Water Sovereignty is Protected and the Agreement with Egypt is a...