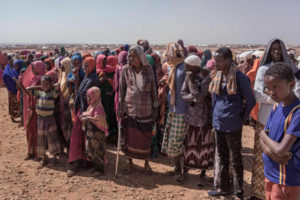 Ethiopia has more new conflict-driven Internally Displaced Persons (IDPs) than any other country in the world, with over 1.4 million this year alone, according to the Humanitarian Information Unit of the U.S. Department of State.

The 2.8 million IDPs in Ethiopia is on top of the 7.9 million people who need immediate food assistance, according to the agency.

With an over 900,000 refugees, Ethiopia is also the second largest host nation for refugees in Africa next to Uganda.

Ethnic clashes between communities along the border between the Somali and Oromo regions led to the displacement of over 1.4 million people last year while hundreds were killed.

The last few months have also seen ethnic based attacks in Benishangul Gumuz and Oromo regions as well as in places in South and Eastern Ethiopia where thousands have been displaced from their homes and hundreds were killed.